Ex-BBNaija housemate, Kiddwaya, decided to learn how to dance and it was a hilarious sight to behold as he couldn’t “whine” his waist.

Kidd has proven that in deed all work and no play makes him a dull boy after he was spotted dancing away his sorrows while on media tour.

He was at Beat FM and Naija FM, and all along, he toured with Prince, who was also evicted from the show same day with him.

While at Naija FM, a pidgin radio station, Kiddwaya decided to learn how to do the “30BG moves” with one of the OAPs who hosted him on the show, RNB Ayo. 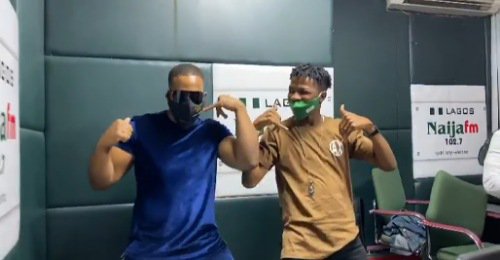 They both danced to Davido’s latest hit “Fem” while Ayo tried to teach him how to dance to the song.

When his dance steps became too hilarious, Ayo gave up and wanted to stop but Kiddwaya would not let him. He insisted Ayo must finish what he started.

Sharing the video, Ayo said it was difficult teaching Kiddwaya how to make the “waist moves”.